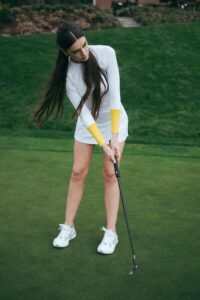 Most golfers are very familiar and comfortable with the term “MOI” because they’ve heard the term for years in golf equipment discussions. Moment-of-Inertia, or MOI as it applies to a putter, is a way to measure how much resistance to twisting the putter head may have on an off-center hit. In putters, the industry assumes that the higher the MOI number, the more forgiving the putter. It is not that simple.

After much research and experimentation, Rich and I have found far more to MOI than what the industry has touted in the past. We have found that there is the MOI created by being low tech and taking shortcuts, and then there is MOI created by genuinely innovative design and pushing the envelope.  There is a big difference between the two!

Taking a Look Back at The History of MOI in Putting

To start seeing the differences, let’s look at MOI in putters from the beginning. No one paid much attention to MOI in putting until Karsten Solheim came out with the first cavity-back blade putter. The cavity-back blade moved some of the weight in the putter head to the heel and toe of the putter, which increased the MOI. It was a rudimentary deployment of raising putter MOI, but it was an effective start. While cutting edge in 1966, the basic design is now teetering on obsolete.

The cavity-back blade putter style is still the most used basic head design today, but it’s been under assault for almost 60 years by putters of all shapes and sizes. From blades to super mallets and everything in between, manufacturers have been working to create putters with high MOI numbers, assuming that higher MOI would make them better. Though they have succeeded in making putters with ever-higher MOI numbers, nothing has replaced the cavity-back design and relegated it to the dust piles of golf history. The reason the cavity-back blade still resonates with golfers, despite some of the larger MOI numbers created by other putter designs, is that none of them really performed appreciably better.

At Sacks Parente, we have found that just because a putter has a high MOI, it doesn’t necessarily mean it will perform better on off-center hits. We experienced the results firsthand as golfers. So, as researchers, inventors, and designers, we wanted to find out why the type of MOI engineered into a putter head had created such a measurable difference in how a putter responded to off-center hits.

What You Need to Know About Gear Effect

You cannot talk about MOI without first talking about Gear Effect. Gear Effect causes sidespin. Clubmakers have been trying to manage Gear Effect since golf’s inception, and they have spent a couple of hundred years trying to find ways to counteract it. Gear Effect occurs when the head’s center of gravity is not in line with the shaft. This is why persimmon, and later metal wood, faces are curved. It’s called Roll & Bulge, and manufacturers use it to help combat the problems caused by the side spin created by the Gear Effect.

Gear Effect is part of the net result of a ball struck away from the clubhead’s center. When struck towards the toe, the ball will hook. When hit towards the heel, the ball will slice. If the face of the wood was flat, when struck off-center, the ball would hook or slice across the centerline and be wildly out of control (yes, even worse than your poorest shot). While your typical iron, with the face closer to being in line with the shaft are less effected, you can be sure that any ball hit off-center by any golf club, including metal wood, hybrid, iron, wedge, or putter, will have GE.

Once you know what Gear Effect is, it’s critical to design putters to minimize its impact on putts. Unfortunately, just increasing the putter’s MOI is not very effective at helping combat the spin created by the Gear Effect. The real answer is creating a high MOI while keeping the center of gravity as close in line to the shaft position as possible.

Most putter manufacturers back weight the head, which effectively moves the CG of the head towards the rear and away from the shaft.  While this weight may help increase the MOI number, it is not necessarily effective weight placement, and any weight added to a head behind the shaft will always create sidespin. The farther away the weight is from the shaft, the more sidespin. The heavier the weight is, the more sidespin. Why do putter designers backweight their designs? Because it’s an easy and cheap way to get a high MOI number. Quite honestly, the public buys it.

MOI is created by removing as much weight as possible behind the face and the rear of the head and putting as much weight as possible in line with the shaft on the heel and toe. The goal is to reduce sidespin (GE) and create a high MOI. By moving the weight forward and into the heel and toe, the CG is brought closer to the shaft. The more forward the weight is, the more the CG can move towards the shaft. This is actually much harder to do than it sounds. A putter head has a finite amount of area, and concentrating weight outward and forward takes a mix of design knowledge, skill, and materials most companies either don’t have, or are unwilling to fit into their budgets.

Clubmakers have been trying to make equipment to counteract the effect of Gear Effect for years. Unfortunately, this is more like treating the symptoms of a cold instead of trying to cure it. But like a scientist fighting a disease, if you work hard and stay at it, sometimes you have a breakthrough.

After the invention of the cavity-back blade putter, more manufacturers started to research MOI. Over the years, there has been much progress in increasing the MOI of putter heads. As time passed, some of these methods became mainstream, and at some point, the golf world started assuming that all the innovation was done — and literally started making the same basic product! A styling tweak here, a screw there, but they all basically looked, felt, and played alike. It’s a sea of sameness.

Most importantly, club designers lost sight of the fact that Gear Effect could put sidespin on a putt of almost any length. What we’ve seen while hitting thousands of putts in player testing and on a putting robot is that many modern putters can even have Gear Effect on a near center hit.

How It Works And The Net Effect

If you could stop a golf swing just before impact, you would see an extraordinary sight — your hands and the clubhead will be in line or plane with each other, but the shaft will be bowed slightly behind that plane and the clubface would be in a distorted position. Bear in mind that we are talking in thousandths of an inch. You are seeing distortion caused by the head and shaft trying to align their centers of gravity, as the CG of the head is trying to catch up with the shaft. This creates Gear Effect. The impact point on the face determines how much GE and its direction. This happens with every club in the bag, including the putter. These are the laws of physics at work. Just because we don’t see it in a putter the way we see it in full swing doesn’t mean it’s not happening. It’s just happening on a much smaller scale. Regardless of how high the MOI is, this phenomenon is always in effect. It is accentuated on off-center hits by how far the CG is from the shaft.

There are several ways to create MOI:

Out of these four ways to increase MOI, adding weight to the heel and toe is the most efficient. By adding a dissimilar and heavy metal such as tungsten to the heel and toe in large volume, we are now creating extreme heel and toe weighting in a forward position on the head.  The added difficulty and costs of this discourage most other manufacturers.

Weight forward MOI is measurably better because the head’s center of Gravity (CG) is more in line with the shaft. While a high MOI number generated by a back-weighted head will not only have an excessive Gear Effect, there is a high probability that the ball isn’t leaving the putter as straight off the face as a front weighted MOI head.  We have also seen that moving weight forward creates much better and consistent roll out.  Simply put, the ball is much more likely to stay on target.

Front-weighted MOI can only be created by removing as much weight from behind the hosel (meaning the rear of the putter head and from immediately behind the center point of the face as possible). It can also be created by adding weight in line with the shaft and as far towards the heel and toe as possible. Front-weighted putters with extreme heel and toe weighting are more stable throughout the putting stroke. Stability helps quiet the hands, promotes a smoother stroke, allows the putter head to follow its intended line, and helps make more putts.

Try it for yourself to see how Sacks Parente putters can naturally improve your stroke! With our 30 day performance guarantee, there’s nothing to lose.

best putter, improve golf game, putter MOI, putter technology
Manage Cookie Consent
To provide the best experiences, we use technologies like cookies to store and/or access device information. Consenting to these technologies will allow us to process data such as browsing behavior or unique IDs on this site. Not consenting or withdrawing consent, may adversely affect certain features and functions.
Manage options Manage services Manage vendors Read more about these purposes
View preferences
{title} {title} {title}