The Secret to Great Putting Starts with New Putter Technology

The secret to a great putting stroke begins with advanced putter technology that helps optimize a player’s center of gravity. Center of gravity, or CG as it’s commonly referred to in the golf industry, is often part of the discussion when analyzing technology in drivers, irons, and wedges. Many players may not recognize that CG also plays a role when talking about putter technology as well. Here we’ll take a deeper dive into how finding the right putter for your specific center of gravity can positively improve your golf game.

The center of gravity is defined as the point at which the weight of an object is evenly dispersed, and all sides are in balance. On a golf club, the CG is where all the points of balance on the golf club intersect. The location of the CG is essential because it influences both performance and feel. 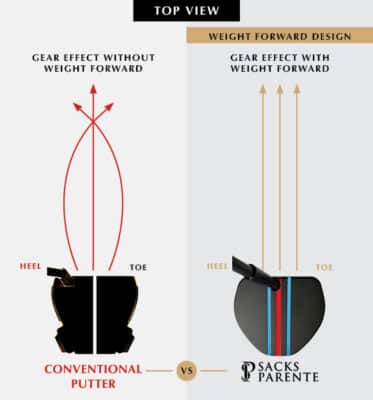 The location of the CG is an emerging technology in putters.

When first introduced, the mallet putter felt more forgiving because it had more weighting in the rear portion/part/body. This rear-weighting technology, however, inadvertently created gear effect, which caused sidespin, and inconsistent putting. The harder you hit a ball and the longer distance it travels, the more that the sidespin caused by gear effect will take it offline. Players found it was hard to control the putt depending on how hard and how far offline the ball was hit. Recently, putter designers have started refining their designs to minimize the gear effect. Some companies have taken it a step further and are trying to get rid of gear effect entirely.

“We’re trying to eliminate gear effect and create a high moment of inertia (MOI). High putter MOI helps players hit the ball anywhere on the face and still get it to roll out to the target,”   said Steve Sacks, Sacks Parente co-founder. “With gear effect, you lose energy. With a weight-forward CG and high MOI, you don’t lose energy, and it allows the ball to roll out better and create consistent distance control.”

In late 2018, Sacks Parente launched a line of putting instruments designed to maximize face-forward CG and lessen the harmful sidespin (resulting from the gear effect) that rear-weighted putters can cause on putts.

In robot testing, even in putts as short as ten feet, Sacks Parente discovered that many mallet putters, and even a few big blades, have gear effect because the CG is placed so far away from the face of the putter. 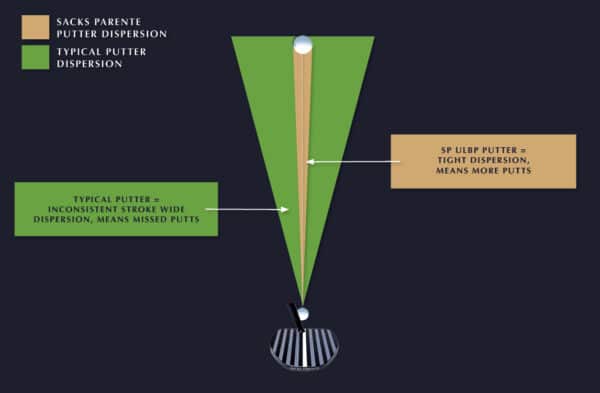 “Sidespin is a great trick in billiards but is definitely not something you want to see on your golf ball,” added Sacks. “If you want to become a great putter, you really need to move to putter technology that supports a weight-forward CG.   You’ll be amazed at the difference it makes in your putting.”

mallet putter, putter MOI, putter technology, putting stroke
Manage Cookie Consent
To provide the best experiences, we use technologies like cookies to store and/or access device information. Consenting to these technologies will allow us to process data such as browsing behavior or unique IDs on this site. Not consenting or withdrawing consent, may adversely affect certain features and functions.
Manage options Manage services Manage vendors Read more about these purposes
View preferences
{title} {title} {title}